In early 2011 PRWF began negotiations to purchase the 100-acre Clark property at the head of Merritt Cove in South Addison. This property abuts the southernmost lot in the PBWMA and thus it extends the protected habitat and is not an isolated parcel.

Merritt Cove is on the west shore of lower Pleasant Bay and is protected from wind and rough water by an island on the western side of the cove. We felt that it would provide excellent access to the bay’s many islands for kayakers and canoeists if we could create a hand-carry launching area at the head of the cove. 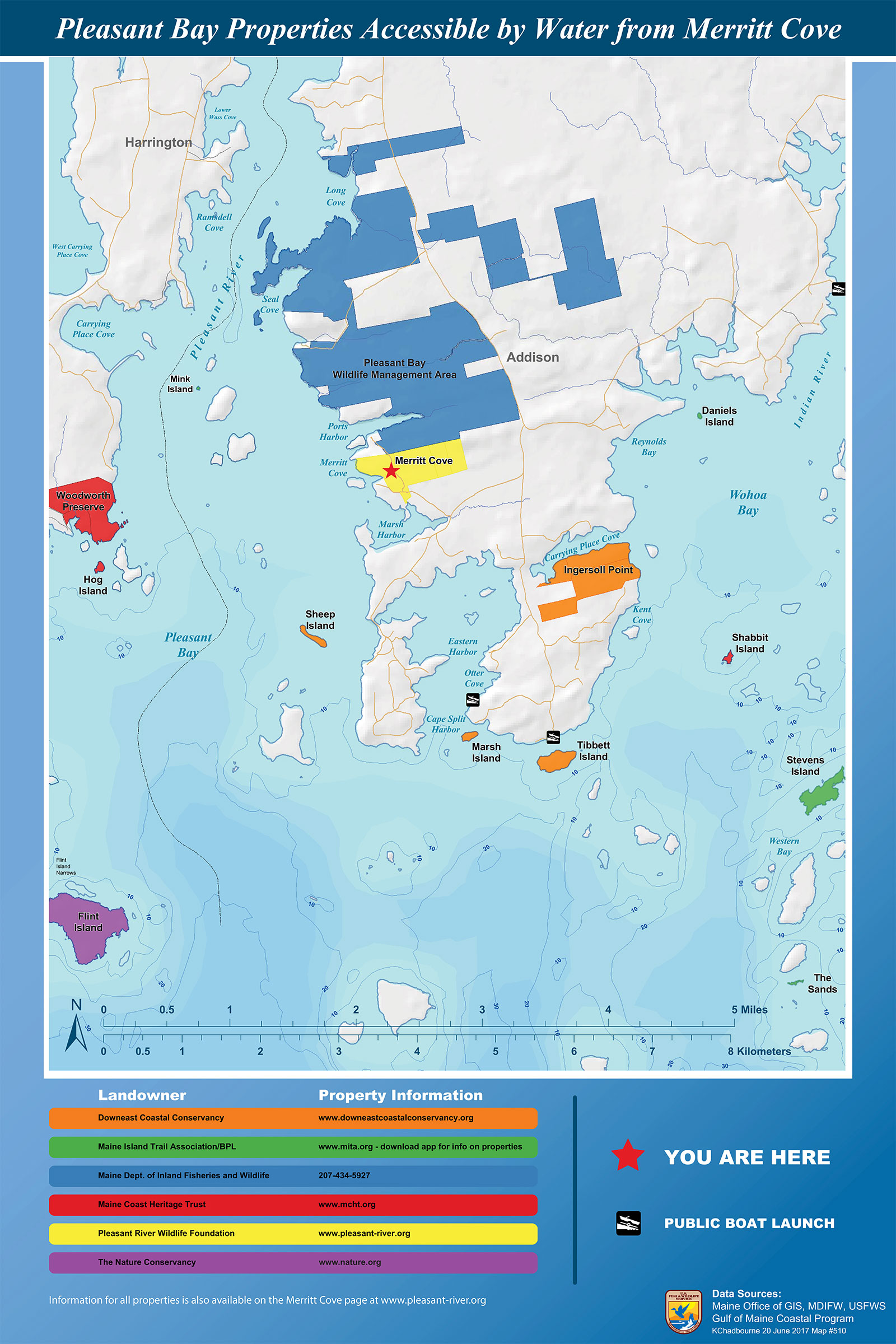 It wasn’t until the spring of 2014 that we were able to close on the Clark property and also on two small abutting lots to the east. The funding for the purchase and the improvements came from a combination of federal, state and NGO grants.

The following summers were spent making the site safe and functional. Our volunteer fire department burned down the derelict house. We removed years of accumulated trash then graded and created a meadow and parking area where the house had stood. We put a picnic table where people could sit and enjoy the view of the cove and signage with information on places that could be easily reached by kayaks and birds that might be seen while paddling in the bay. We built steps to the shore, wide enough for people to carry their boats to the water, and installed a small aluminum bridge to make it easy to cross a small creek at the foot of the stairs.

It is important for people using the launching site to keep in mind that the tidal range in the cove is over 10’. The cove at high tide is very different from the cove at low tide. While at high tide it is possible to launch at the head of the cove, at low tide the boater will return to mud flats and a zone of rocks close to the head of the cove. These are hidden at high tide. There is a rock-free path marked by stakes that runs along the eastern shore of the cove from the mudflats back to the aluminum bridge. 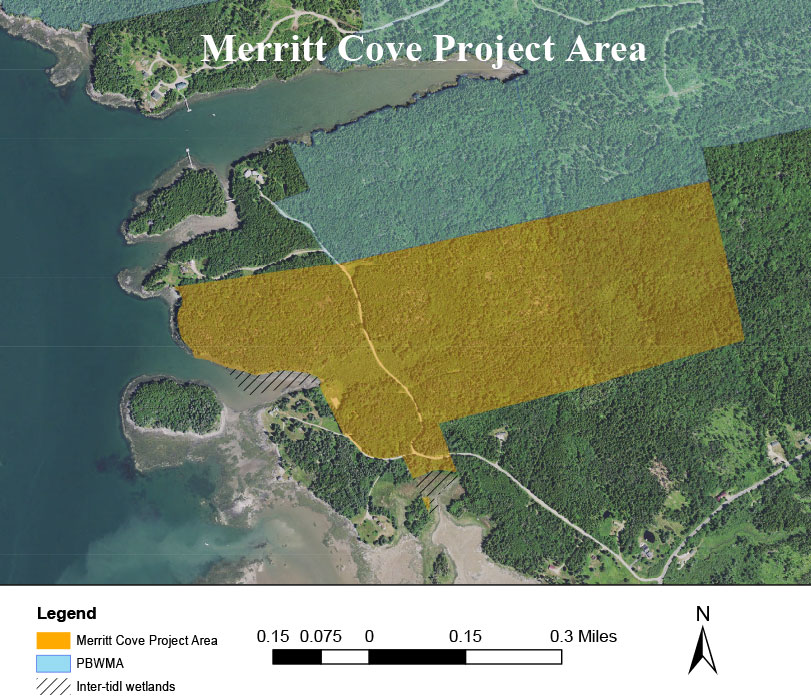 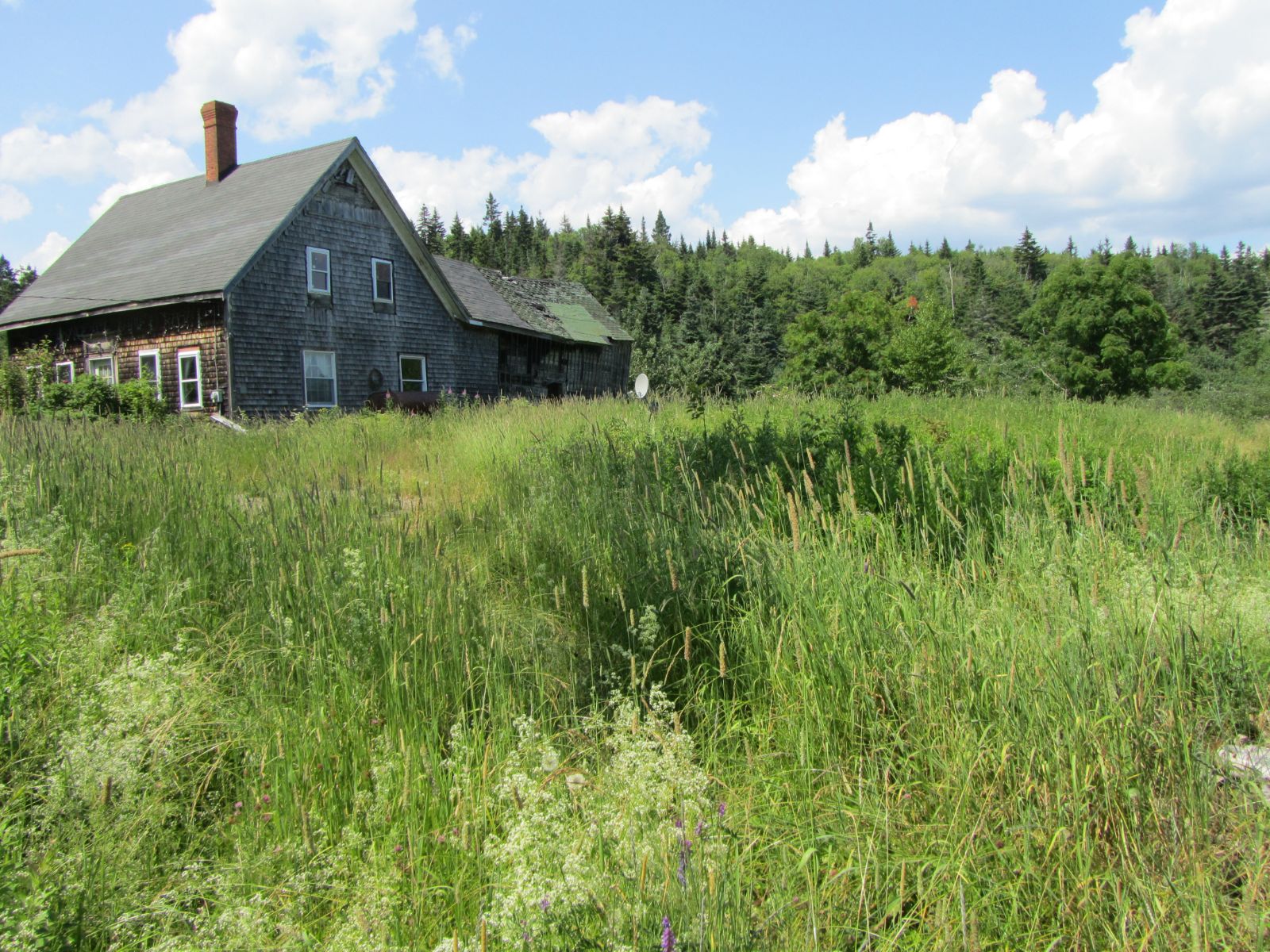 After purchasing the property the first task was to remove the house and clean up the site. 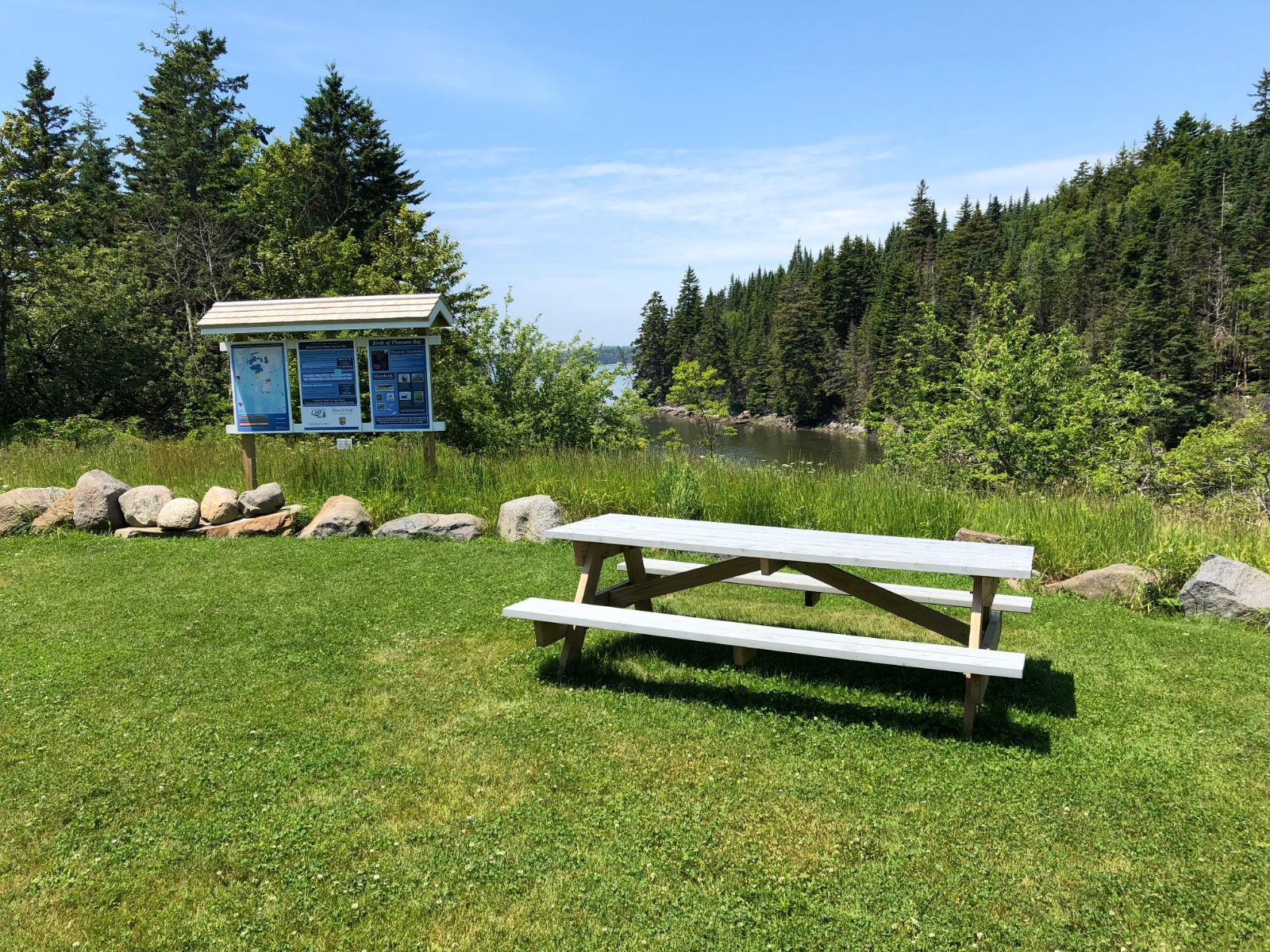 We then graded the site and leveled a parking lot. We spread grass seed, put up signage and built a picnic table. 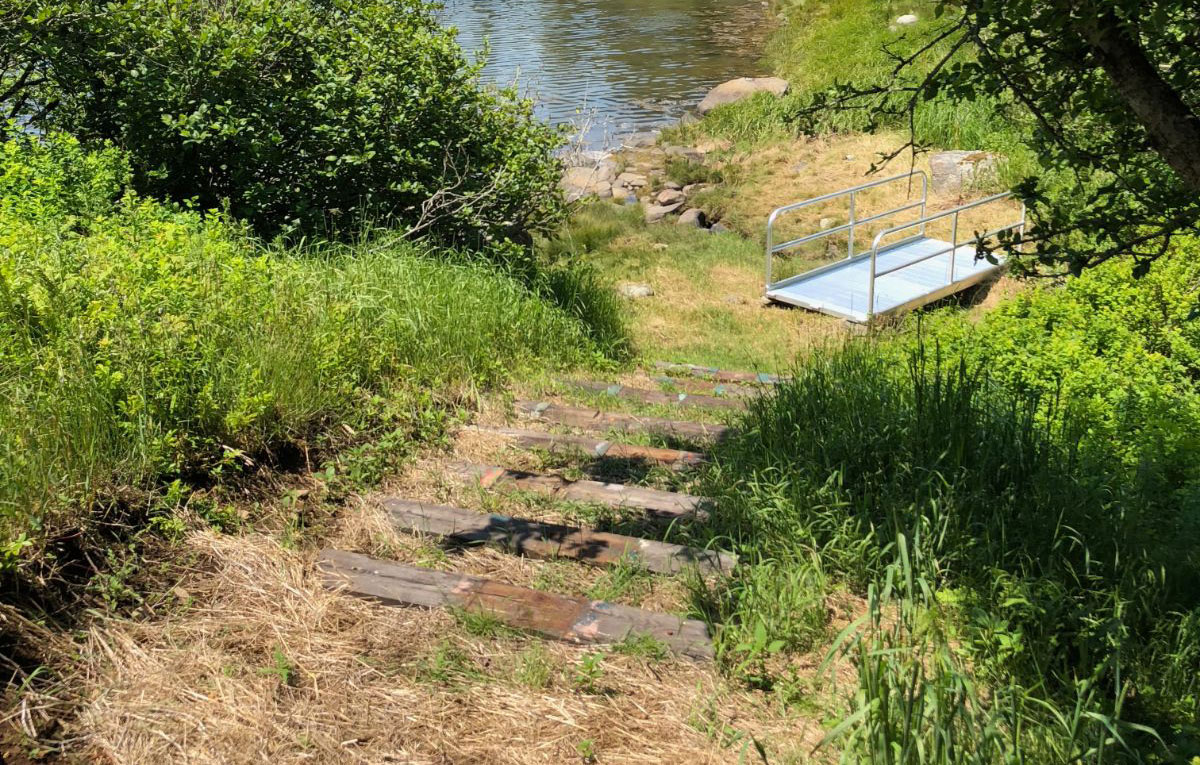 Then we built a stairway down the slope to the water and put a ramp across the small brook, all to make launching kayaks and canoes easier. 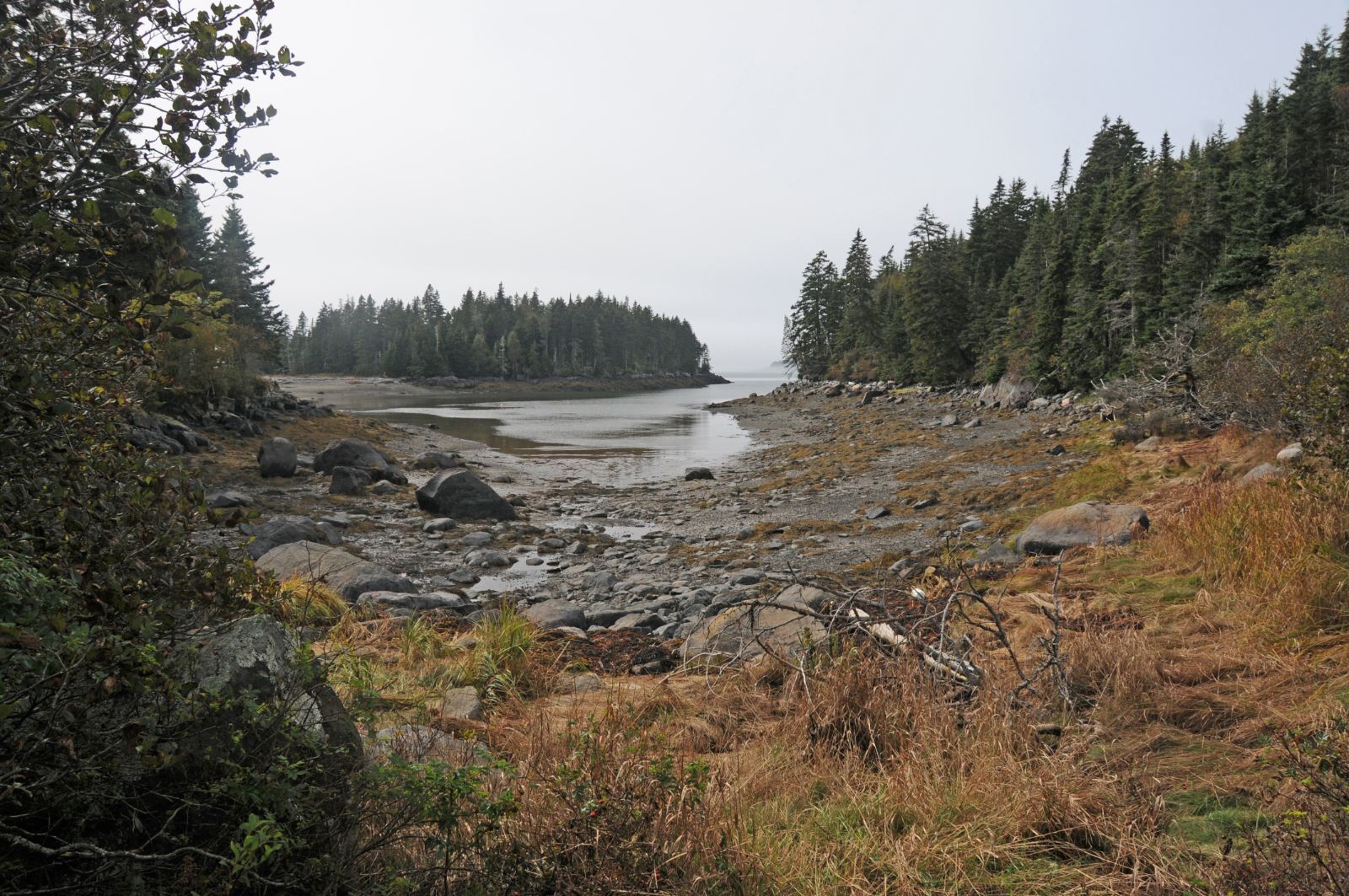 Because there is a large tidal range the cove at high tide looks very different from the cove at low tide. Launching a boat at high tide is straightforward. At low tide it is more difficult. In addition to the ramp to facilitate crossing the creek we have put out stakes along the eastern shore of the cove that mark a walking path that avoids the rocks at the head of the cove and provides easy access to the mud flats. 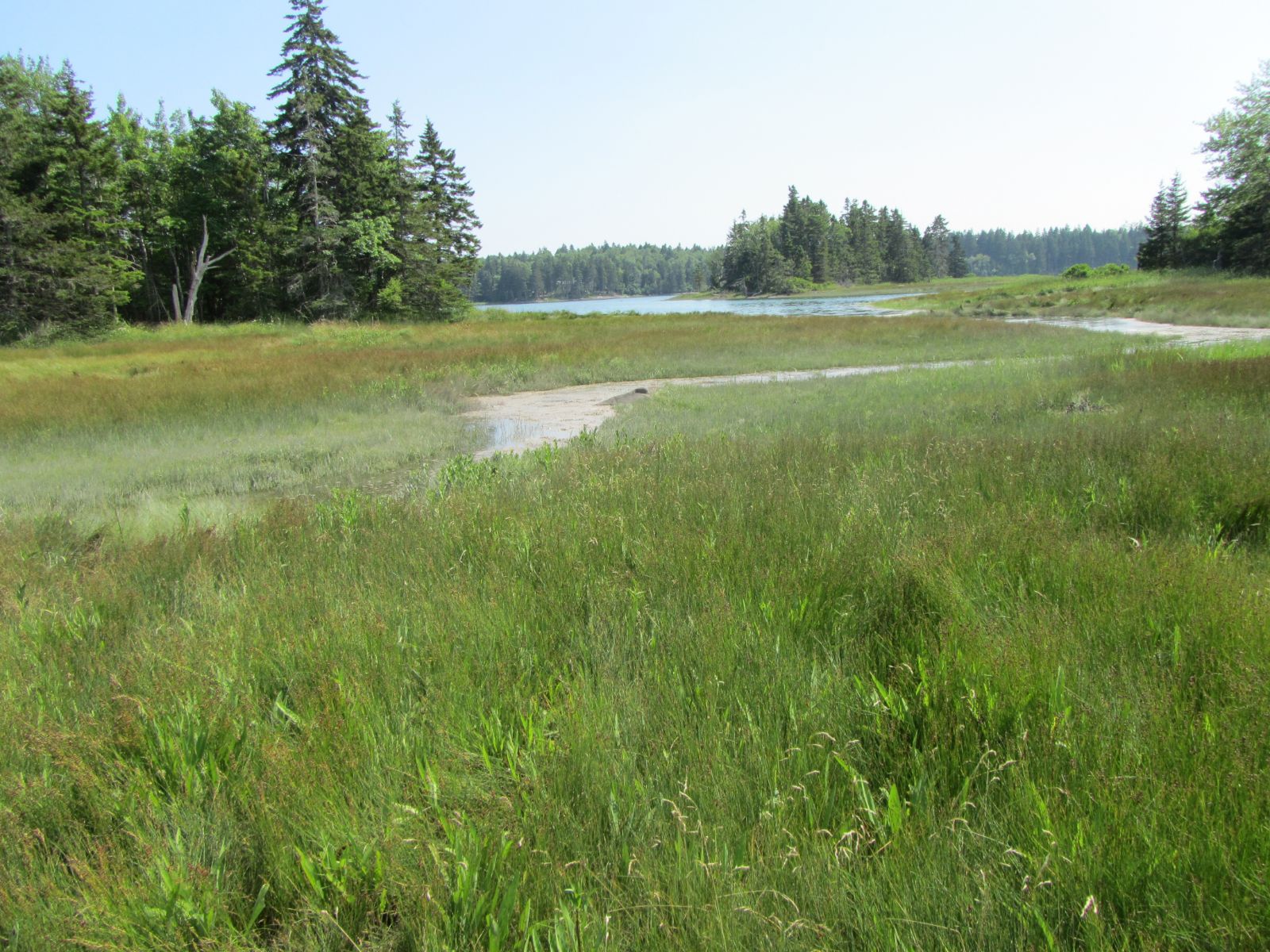 On the south side of the access road the property includes a small area of salt marsh which extends out into Marsh Harbor where one might catch sight of waterfowl or shorebirds.