American Woodcock are only 11" long on average, even if one counts their very long bills. Additionally, they are propelled by wings that are improbably stubby for an annual migration that takes them from Maine to Louisiana.

They are both a legendary New England upland game bird and, surprisingly, considered to be a shorebird albeit one that frequents woodlands habitats. The male woodcock’s spectacular evening mating flights are a delightful early sign of spring in the rural northeastern US, the Canadian Maritime Provinces and the upper Midwest. However, over the past forty years, the woodcock population has declined more than 50% in the eastern part of its range. The male’s distinctive nasal “peent” song and spiraling courtship displays have disappeared from many New England and Maritimes areas due to the degradation and loss of essential habitat. 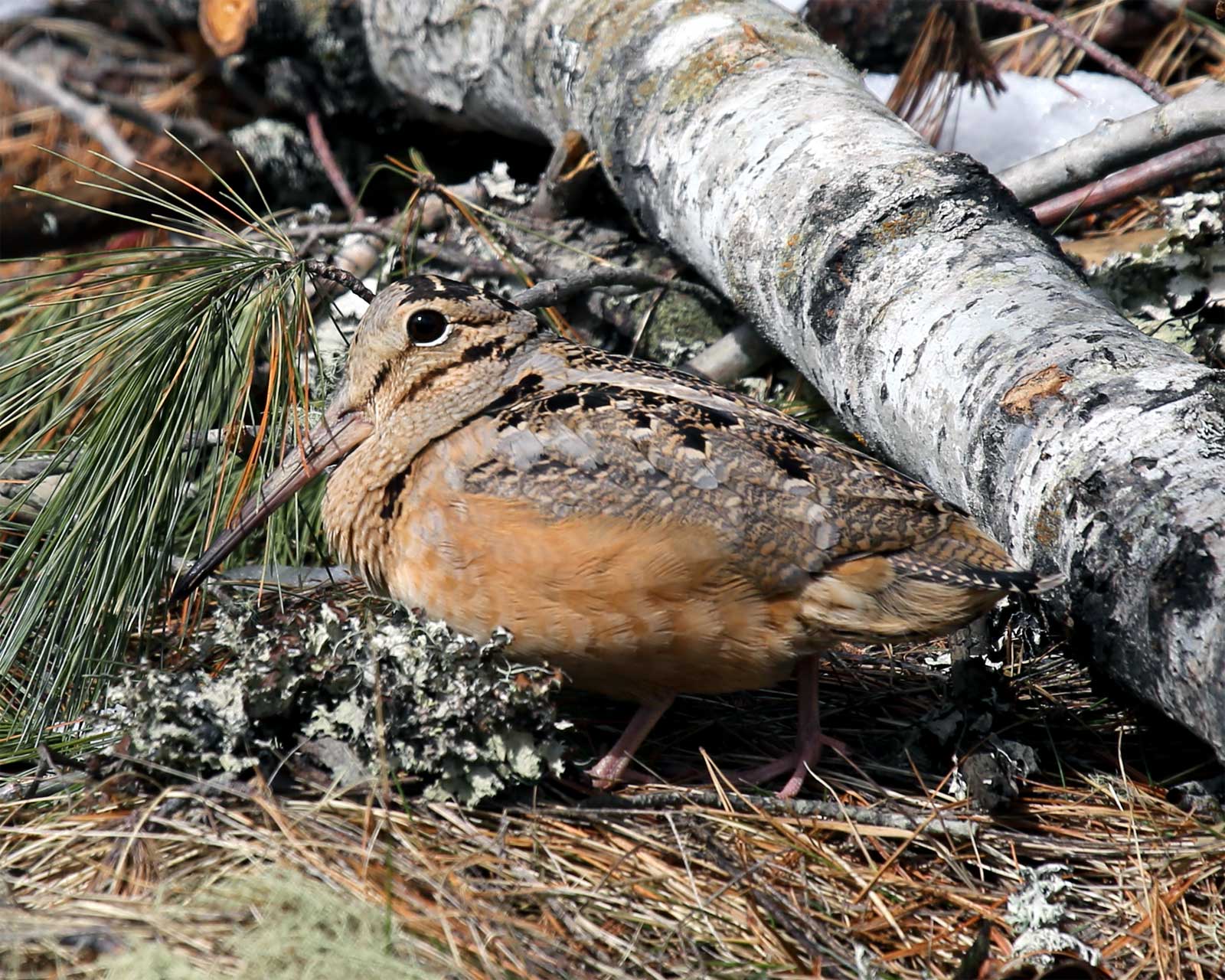 Woodcock depend on the Downeast coast’s young hardwood forests and shrublands, old farms reverting to forest, poorly drained alder thickets and forested openings both as fall and spring migration stopovers and for nesting and brood rearing habitat. Males need openings for breeding displays and singing, and larger clearings of several acres are important evening roosting sites. Woodcock probe in moist soils under young trees and shrubs for earthworms which typically make up 80% of their diet. Seeds, small insects and other invertebrates account for the rest. Each fall, these unusual-looking birds migrate to their wintering grounds in the southeastern and Gulf Coast states. 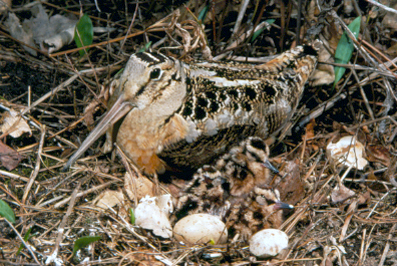 Mother woodcock at her nest with newborn chicks

Because its climate is moderated by the waters of the Gulf of Maine, coastal Washington County offers some of New England’s most productive woodcock habitat. Late spring snows are less likely to frustrate nesting near the coast where average spring temperatures are higher. And, during the fall migration hard freezes come later along the coast allowing the woodcock more time to feed and fatten to be in prime condition before needing to head south.

One of the facts of woodcock life is that the overstory of alders and brushy shrubs thins over time and once-ideal coverts “age out” making feeding woodcock more vulnerable to avian predators and letting in sunlight that promotes a tangled growth of ground cover. It is difficult for woodcock to move about and find food when the ground is overgrown. Eventually ideal habitat reverts to mature forest. Accordingly, woodcock cover constantly needs renewal. Some renewal is provided by wild fires and timber harvest but other areas need active management as they grow older.

Balancing the needs of species like woodcock for early successional growth with the needs of species that require mature forest is an intriguing conservation challenge for organizations like PRWF that undertake active habitat management. Making good decisions about the size, configuration and location of areas to maintain for woodcock habitat and whether or not fires or other natural disturbance regimes are adequate to meet the needs of woodcock requires a local as well as landscape-scale perspective. 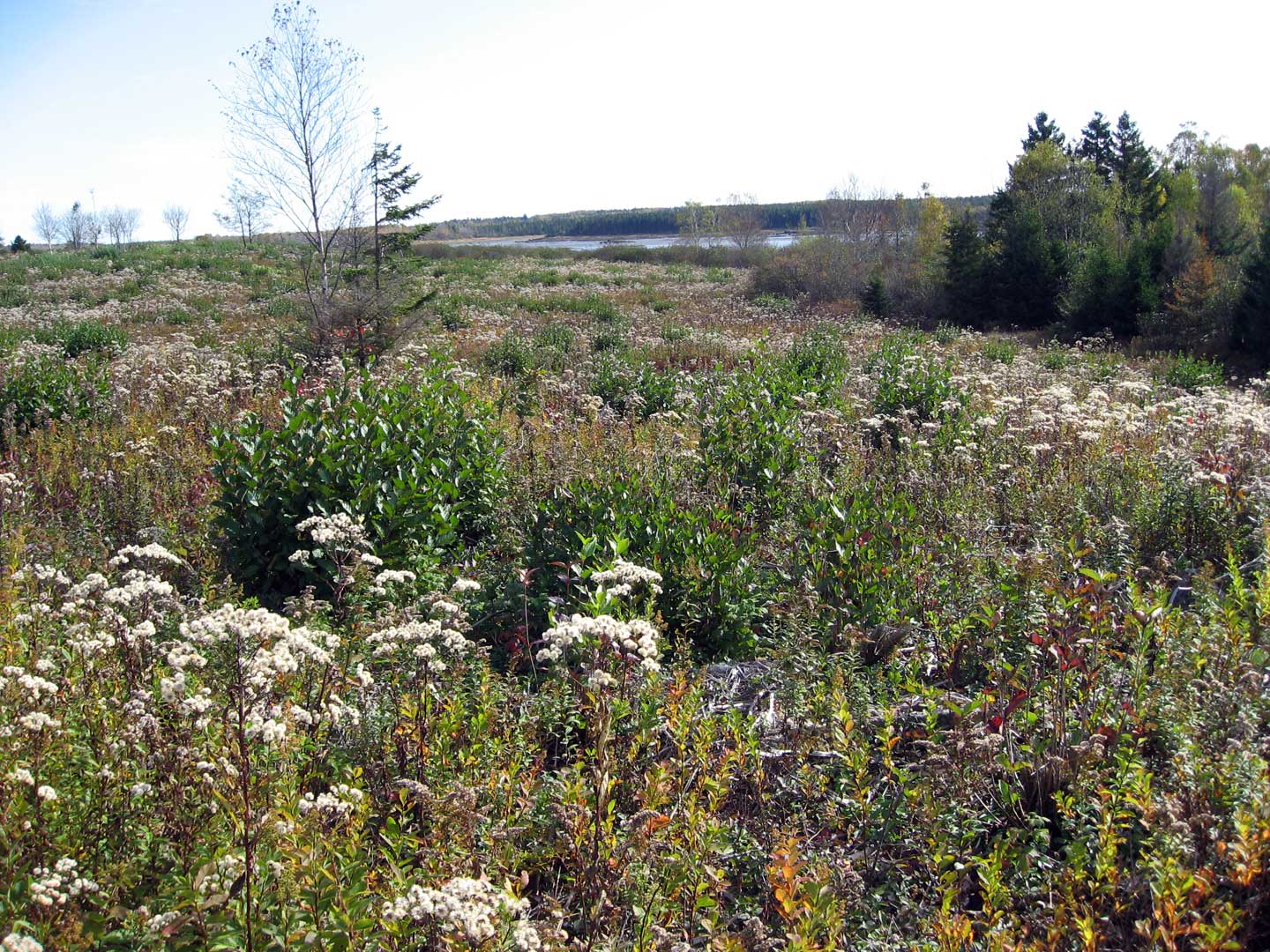 This field is mowed every couple of years to keep it open for displays and roosting.

With these factors in mind Pleasant River Wildlife Foundation began working on its first woodcock habitat management project in 2009 in concert with The Northern Forest Woodcock Initiative. With leadership from the Wildlife Management Institute and the US Fish and Wildlife Service the Initiative is committed to reversing the downward trend of the woodcock population through habitat restoration projects in New England.

During March of 2009 David Look of Jonesport used his excavator fitted out with a “Brontosaurus” head to enhance woodcock habitat on PRWF property on Crowley Island in Addison. He cleared a roosting field of about 8 acres on the broad point just south of Bryant’s Island, once a pasture in a now-abandoned farm, and has mowed every year or two to keep the meadow open. He also cut a feeding strip of about 1.5 acres nearby with additional feeding strips to be cut in future years to establish a rotation of varied age growth. In addition to the roosting field and initial feeding strip three small singing grounds with a total area of 2 acres were cleared along the access road.

The "Brontosaurus" at work and views of the roosting field during and after cutting.

In addition to Crowley Island many of PRWF’s other properties have prime woodcock habitat particularly three Indian River properties north of Crowley Island where the Indian River is relatively narrow, but still partly tidal. The entire 270-acre preserve, which is more than 50% wetlands, has superb woodcock habitat. ​These properties have now been transferred to the Downeast Coastal Conservancy for future management.

As we consider new candidate parcels for protection along the region’s estuaries we will continue to search out high quality woodcock habitats and include their active management and maintenance in our long range plans. 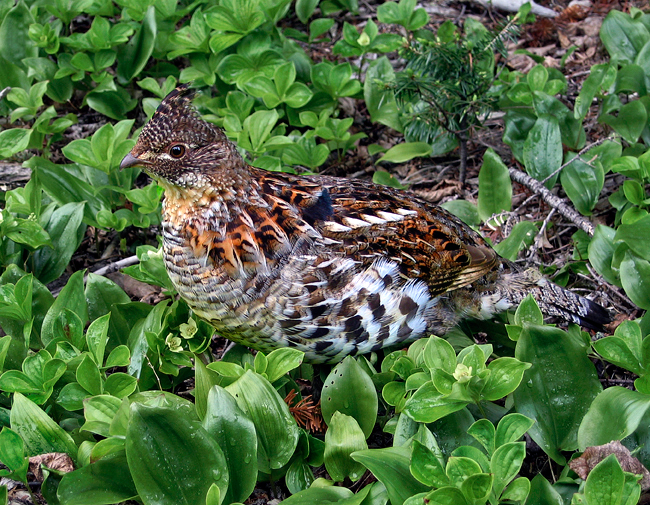 The woodcock habitat project is also beneficial to Ruffed Grouse.