When PRWF was founded in 1998 there were only a few small land trusts based in coastal Washington County: Great Auk Land Trust and Quoddy Regional Land Trust (which merged in 2009 to become the Downeast Coastal Conservancy) and the Downeast Salmon Federation.

Maine Coast Heritage Trust, a state-wide land trust and the Nature Conservancy, a world-wide land trust, were also active in Washington County. These land trusts were all working to preserve available properties with good conservation values.

PRWF entered the conservation arena with a very focused mission of protecting coastal properties. The founders, Anne and John Marshall, owned acreage in Addison that would become the center of the conservation effort but they wanted to protect an even greater area.

PRWF was formed more than 20 years ago. During the first five years, when no one had heard of the Pleasant River Wildlife Foundation, Maine Coast Heritage Trust took our fledgling organization under its wing and helped us establish our priorities and acquire our first properties. MCHT realized that having a locally based land trust like PRWF as their partner would allow them to increase the amount of coastal property that was protected without having to do all the work themselves.

MCHT helped PRWF make contact with conservation minded land owners in our area and assisted with the writing of our first State and Federal grant applications. Their strong endorsement added credibility to our projects. Throughout the early years of our initial purchases MCHT was always at PRWF’s side, giving advice and helping us raise the necessary funds. This working cooperation remains strong today.

The Heads of the Estuaries Partnership

As PRWF gained experience we realized that our region’s land trusts had broadly overlapping areas of interest and should be able to be more effective when working together, combining complementary skills and pooling resources. PRWF suggested the formation of an informal consortium with the shared mission of protecting large blocks of prime coastal habitat in the area between the Schoodic Peninsula and Machias Bay. The concept was well received and in 2007 PRWF took the lead in forming the Heads of the Estuaries Partnership.

HEP grew into a broad based group including:

Working together the HEP partners identified the highest priority conservation opportunities in the region and over time completed ambitious multi-property and landscape scale projects that would have been beyond the capability of any single partner acting alone. Because so much of the important habitat in our region had been divided into relatively small units through inheritances or sales of land our job was to “de-fragment” these landscapes, recreating the relatively large contiguous sweeps of habitat that are most productive for wildlife.

The partners set HEP’s first five year goals as protecting at least 7,500 acres of coastal wildlife habitat and over 25 miles of salt water frontage. Once these major goals were agreed upon each HEP partner took responsibility for leading the negotiation and acquisition process for one or more of the parcels that would be knit together to complete the major projects. PRWF took responsibility for the Pleasant Bay/Crowley Island Priority Area and for the Mason Bay Priority Area. 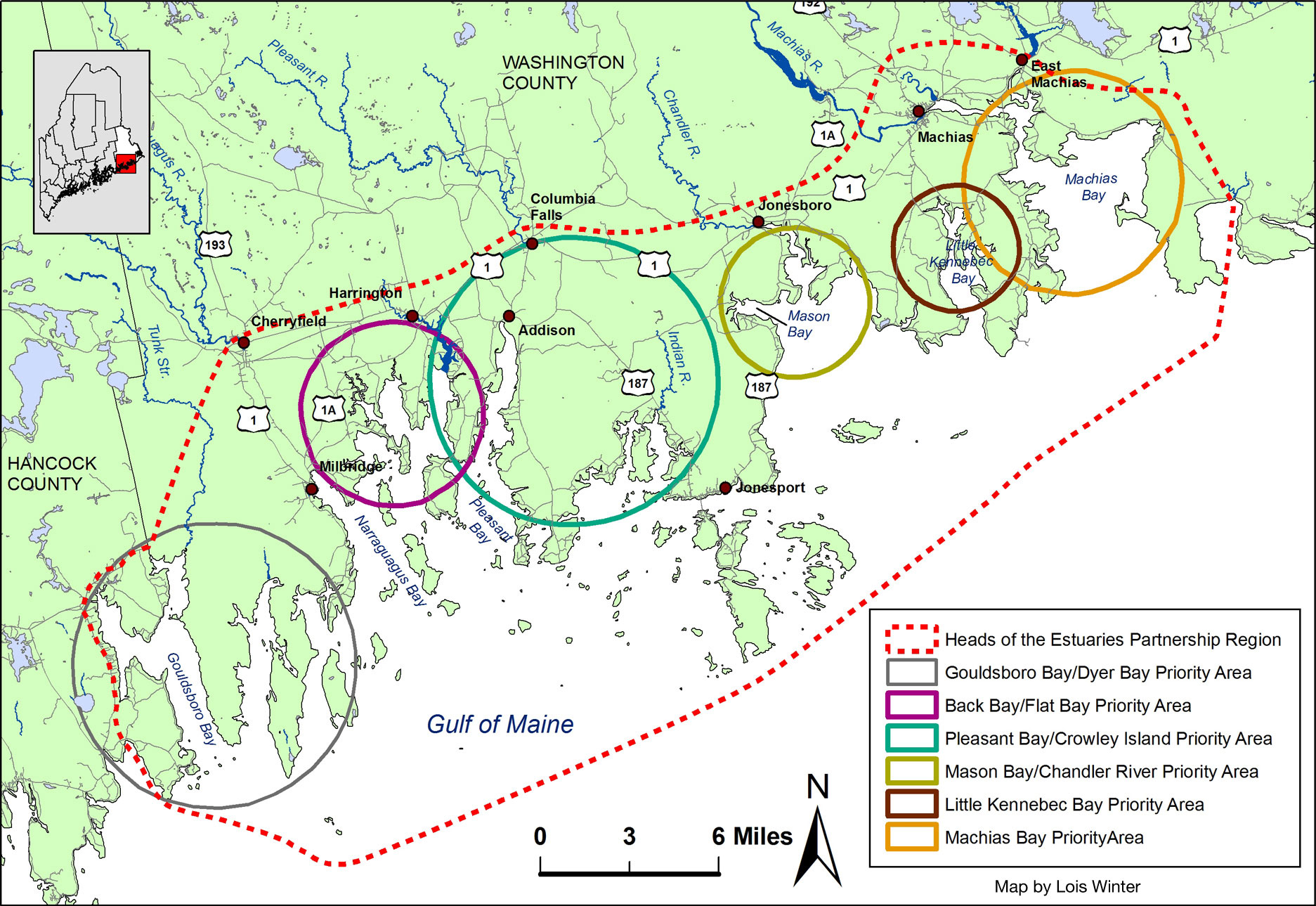 HEP’s major funding efforts would be cooperatively undertaken and would provide financial support to the responsible partners for each of their acquisitions. We felt that we could make a more compelling case and raise more money from state and national conservation agencies, foundations and major donors by presenting a partnership strategy of preserving large contiguous blocks of the highest value habitat rather than scattered and unrelated acquisitions by each organization.

PRWF took responsibility for writing and submitting a series of three $1.0 million USFWS HEP Grants under the North American Wetlands Conservation Act as well as a large Land for Maine’s Future Grant. We also spearheaded a cooperative effort in Pleasant Bay with MDIFW by securing essential funding from the USFWS Coastal Wetlands Grant Program and other partners for the creation of MDIFW’s new Pleasant Bay Wildlife Management Area.

HEP achieved its initial conservation goals with dramatic success. In its July 2009 newsletter, the US Fish and Wildlife Service’s Atlantic Coast Joint Venture recognized the Heads of the Estuaries Partnership’s success in identifying high value estuarine habitats, negotiating with land owners for their long term protection and raising the funds necessary to acquire fee interest or conservation easements.

“The Heads of the Estuaries Partnership seems poised to quickly join the ranks of some of the ACJV’s most successful focus area partnerships in wetlands conservation, including areas like South Carolina’s ACE Basin, New Hampshire’s Great Bay and Maine’s Kennebec Estuary.”

Working relationships within the HEP group have become so well established that formal sit down meetings are no longer needed, a phone call or email exchange is enough to agree on new priorities. The cooperative approach has been proven and continues to be evident in regional conservation initiatives to afford protection to Maine’s Rockweed beds, to respond to the challenges of climate change and to link coastal conservation inland via corridors of conservation along regional rivers.